What About Fender Neck Heel Width?

We have seen a number of discussions on the forums concerning the heel width of Fender necks and what the corresponding width of the pocket in the body is or should be.  So what is the official width of the Fender neck heel?  It is our opinion that it is 2-3/16″ = 2.1875 = 55.5625mm. How did we come to accept that? Read on and we’ll attempt to dispel myths and provide understanding of how necks and pockets fit together.

First, you have to accept that Fender necks and body pockets are all over the place when measured.  Some of this is because of the extended humidity levels the necks and bodies are kept in.  Fender is no slouch when it comes to manufacturing and they cut their parts to a highly consistent dimension within batches and they cannot control the humidity outside of their facility.  The machining that contributes to this is probably due to using resharpened CNC bits when manufacturing.  When these bits are resharpened their diameter is reduced slightly, thus reducing the pocket size and enlarging the neck heel.  When the humidity is low for extended periods the neck and body pocket will shrink.  The neck gets smaller and the pocket gets bigger.  Here are two pictures of a Fender American Strat neck measured when the humidity has been at 25% to 30% for a couple of months.  And another taken of a different neck in October of 2014.  There is quite a difference.  That second neck won’t fit in some Fender pockets. 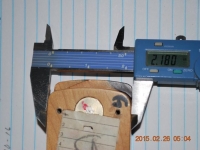 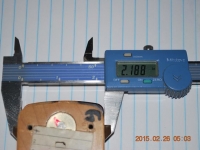 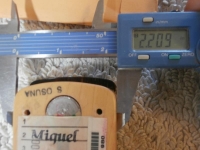 As you can see in the first two pictures, it measures what might be considered small. When it is like this it will flop around in the pocket of it’s body a little.  I have measured this neck many times and in the summer months when humidity is upwards of 45% and higher it will swell up around ~2.198 at the heel.  And it is pretty snug in it’s body.  We will post a picture of that when summer arrives and the neck has adjusted.  In addition, we have measured many necks in the summer months, both Warmoth and Fender from 2.178 to 2.201. Why would they not all be the same?  Maybe because of the CNC tooling mentioned above and because the wood used on a given neck will swell or shrink more or less than another piece of wood.  Shrinkage can be as high as .022 and that’s a lot.  Grain patterns are different.  Flat sawn, quarter sawn, and rift sawn all add to the excitement and all shrink or swell at different amounts and rates.  And then there’s the finish.  If you want to dig into the specifics, the forest service has done the excellent research for you here with your tax money.  It was a good investment and the knowledge now belongs to you!

Fender at one time specified their neck pocket as being 2.200 to 2.215.  That was obtained from a drawing that has been circulating on the web for years of a 62 vintage Strat.  You can find that drawing if you look for it.

Warmoth will tell you on their site that they use 2-3/16″ as the heel width.  How did Warmoth come up with that?  Who knows?  But they have been in the contract business in the past and maybe in the present so they have some earned insight into that dimension.  You have to make a decision on who to go with and we chose Warmoth.  Why?  Because they are an American company and the largest provider of after market necks and bodies in the country.  We make our necks to fit their bodies because that is the bulk of the aftermarket.  And our necks fit Fender bodies also. We sell about as many stock and custom necks to Fender owners and they fit fine with the addition of one of our shims when needed.  That is another story altogether about the Fender neck pocket and it’s depth.  It is addressed over here  and has caused some discomfort between Stew Mac and us.

One more thing.  If you measure the neck with accurate calipers like we did, you’ll find it is slightly wider at the top than it is at the bottom.  This is because the wood for the anchor slug and the truss rod was cut out of the bottom and the wood seems to pull up more when it shrinks.  The two pictures and placement of the calipers above show that anomaly.

So it’s nice to have a neck that is a snug fit- that’s what we all want but that is not the way they always are in the real world.  Most people have one or two guitars and that is their reference point.  If the neck is snug they assume all of them are and that is just not the case.  Maybe it is too big to begin with.  When did they check it to see that is was snug?  What is the humidity in their dwelling?  If it is not snug they may think they have an inferior guitar and that is not the case either.  Maybe the humidity was low or maybe it was just loose.  Understand that bolt on guitars designed by Leo Fender were meant to be repairable- to throw the neck away and get a new one when or if the time came.

The outer limits of snug necks.  There is one large body manufacturer that lets nitro run over the walls into the pocket of their bodies.  Mostly because that’s just what it does when they paint it.  They put a sticker in the pocket telling you not to remove those lumps of lacquer and that they are an intended professional process to make the neck tight.  Then they follow up with a caution note at the bottom that says paint is extremely brittle and be patient with the assembly process.  In reality, if you attempt to remove that lacquer improperly it will most likely chip off the top edge of the body pocket, you’ll want to send it back as defective, and they don’t want it back.  But if you don’t get it off the walls of the pocket the neck won’t fit in it.  We know about this.  I keep that sticker on my bulletin board as a reminder of some of the nonsense that goes on in this guitar business.

I hope this info helps with your neck heel measurement decisions.  If you feel your guitar should have the dimensional tolerances of an aeronautical fuel pump you should step back, take a breath and think about it.  You have something made out of wood, the same material cavemen made things out of.  Enjoy it, and don’t judge it while it expands and contracts and does it’s natural thing.