Facts about Fender bodies and what you need to know to properly purchase the right neck:

To summarize before even getting started, Fender made the neck pockets of their guitars different sizes over the years. Now on to the details. 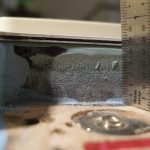 What this means is that for most OEM necks the bottom of the heel to underneath the fretboard is 3/4″ or .750- this gives room for a bit less than 1/8″ underneath the fretboard overhang for a pick guard. Back in the day of 21 fret necks there was no overhang. Back in the day Fender did use a 5/8″ deep neck pocket but they don’t anymore and that is important, at least on current Teles and Strats since 1996, and maybe more from my measurements. But you can’t be sure every Fender model is the same. I have measured these American guitars as they come into the shop, including my own, and the neck pocket is 11/16″ or .6875 deep, except for ’73 models that are 5/8″ deep. I state American because they are the standard to measure by, not MIM’s or Asians.

So, if you order a .750 neck from Aperio or anybody else it will not fit a current American Tele or Strat that has an 11/16″ neck pocket without cutting off the pick guard!

.0625  is not enough clearance for a pickguard to fit under the 22 fret overhang when the neck is in the pocket. A pickguard is .090 thick.

We have seen guitars where people bolted the neck on, not realizing the overhang of the fretboard was holding the neck up out of the pocket. This will eventually warp the neck and fingerboard or separate the fingerboard from the neck if it is a glued up neck. 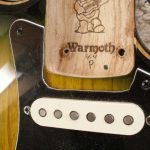 See that pick guard in the photo on the left? It was used on a Fender body where the owner had to cut it off because of a .750″ thick neck and then it was moved to this Warmoth body where the pocket is 5/8″ and now it does not need to be cut off. But it’s too late now. That was unfortunate. He had to buy another pick guard.  If you buy a .790 Fender neck and put it in a 5/8″ neck pocket it will be too high. If you are ordering a replacement neck for a Fender body from Aperio or anybody else you should measure the neck pocket depth. We contacted a major neck maker in the northwest about this who at that time only made necks for 5/8″ pockets and told them their necks won’t fit Fender bodies but they sold their necks as fitting Fender bodies. They ignored our inquiry, so be forewarned. Some neck makers may not mention this fact to you.


The industry standard width of a heel on a neck is 2.190. They actually measure from 2.180″ to 2.204″ for current American series guitars. Some of this variance is due to the humidity when they were measured and some of it is due to manufacturing tolerances.  This implies the pocket is the same width. We have measured more Fenders than most people will see and these are their measurements. You should also measure this if you can. Aperio necks are built to 2.190″ +.010 to -.005. But due to the same factors the width can vary slightly.

We tend to build them slightly oversize for a tighter fit in the pocket. Humidity affects wood. When it is dry the pocket and neck shrink. When the pocket shrinks it gets bigger and when the neck shrinks the heel gets smaller. When the humidity is high the neck and pocket swell and just the opposite occurs, the pocket gets smaller or tighter and the neck heel gets bigger. And to further complicate things the neck and body undergo this expansion and contraction at different rates due to the cut of the neck being either rift, flat or quarter sawn, the type of finish and different species of woods.

Some Fender necks made back in ’73 and probably before had a heel width of 2.225. Did they all? Who knows? I don’t make necks that will fit those and am not aware of anyone else who does either.

We don’t know why Fender did all this – probably due to manufacturing processes and to decrease production costs at various times. Fender makes fine instruments but these variances do exist. You need to know what kind of neck you need to purchase so it will fit.

This is what you need to know to fit a neck to a Fender body.
If the Fender neck pocket is 11/16″ deep neck and your neck is .750 under the overhang then you will need one of our Neck Pocket Shims.

If the Fender neck pocket is 5/8″ deep and your neck is .750 under the overhang then you are good to go.

If you put a .790 Fender neck in a 5/8″ pocket the height of the neck might be too high to adjust the saddles properly.

Once again, you have to measure to know what will work and what you need. 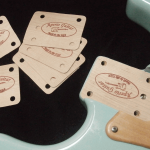 If you have a .750 neck and want to put it on a Fender body that requires a .790 neck we have a solution for you. We make solid maple CNC machined spacers that are .040 ±.003 (1mm ± .08mm) thick. Put one of these in the pocket, bolt on the neck and you are good to go with tight wood to wood coupling. It is as good as if the neck were made for the body.

Here is a link to the store.

In fact, that is what I do on my own Fender American Strat. I move my necks around between bodies- some Aperio bodies, some Fender bodies, some Warmoth and some Best Guitar bodies, and if I use a .750 neck it will work on ALL bodies including Fender with this shim. Think about that before you purchase. You can use one neck on any body! It’s the best solution for your Fender body as it gives you the flexibility to use anyone’s neck.

If you buy a .750 neck from Aperio and specify you are using it on a Fender body we’ll include a pocket shim for free. These shims take some time to make. Though they might appear simple it takes man hours to mill these little babies.

Send us an email if you have any questions on this.